2020 was an embodiment of the latin phrase annus horribilis (terrible year). The last time I remember smiling at a newspaper was exactly three weeks before our global headlines were swallowed by a microscopic organism. I was in Dhaka in February working on a new film, and Emeka Okereke and the Invisible Borders team were installing their project at Bangladesh’s national Shilpakala Academy.

Emeka handed me a copy of The Trans-Bangladeshi, a newspaper published jointly by Invisible Borders Trans-African Organisation and Bangladesh’s Pathshala photography school. The immediate sign that something was awry in a good way was the price– “Taka 0,” a defiant way of announcing: we refuse to profit from this. The lead photograph had both the Bangladeshi photographers I knew well (and some–Sayed Asif Ahmed, Sadia Marium–I have worked with) and the team of African writers and photographers who had arrived in Bangladesh for the first time. Captured by Emeka, the black and white image had a sepia sheen that somehow rendered the African and Asian team members copacetic beyond their passports, differences marked only by small glimmers of local fashion. 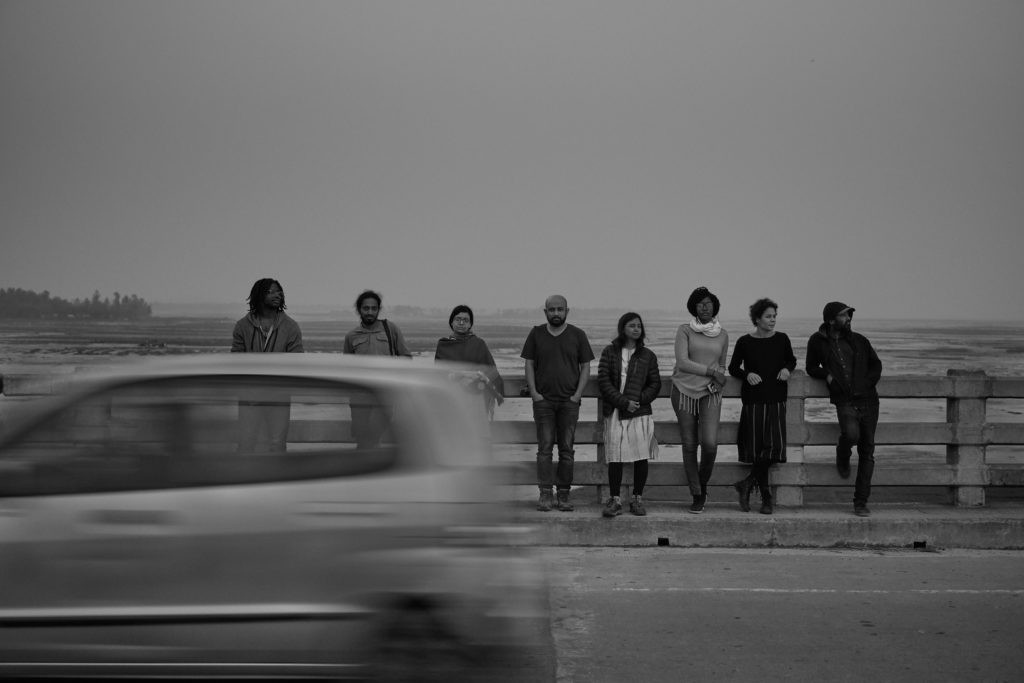 But what was local anyway? In Invisible Borders’ imagination, that shawl was as likely to be a roadside find in Lagos, as it could be a gift from Dhaka friends. In its staging, it also reminded me of one of Okereke’s iconic images for an African road-trip (Dilemma of a New Age II, 2012 [see cover image])– the gas station attendant holding a petrol pump nozzle to his head, as if to say to a rapacious world: you’re trying to kill me. Apropos worth a continent, the lead news story in this Africa-Asia joint newspaper was Kay Ugede’s “Let’s Try On New Clothes.” The rest of the newspaper alternated between English articles, and Bangla texts from the local artists. Again, as if to say: those who know will read, we don’t translate to make it easy. Three weeks after I picked up this newspaper, much of the world would go into lockdown. Invisible Borders’ beautiful project to break down checkpoints between African nations, and between Africa and Asia, suddenly faced a new enemy. Since March 2020, a hygiene regime has been attached to surveillance and border controls, the global movement of humans is now at a hard stop. Nativists and xenophobes have a new excuse, which us also an old one: they may carry disease to our shores. This is a necessary time to insist that the dream of a Trans-African Organisation must not be allowed to perish in this pandemic. A dream of open borders, through journey, stories, and images, between African and Asian nations, stands in stark contrast to the nightmares that have grasped our lives, and been accelerated by autocratic dictators, North and South.

For a decade, Invisible Borders has been committed to a journey that defies the standardized incentive-reward system of contemporary art circulation. The making of artwork is heterogeneous and universal as we wish and will it. However, the majority of capital flows around art distribution remain concentrated in Europe and North America; and because capital is loud, these are the tranches that often stand in for all of contemporary art. A familiar journey is for the artist from the Global South context to gain a legibility and accelerated circulation  exactly through recognition by Northern gatekeepers. Even the performance of authentic forms is striated with the question: which audience matters? From the beginning, Invisible Borders and its expanding team has insisted that the dialogue is South-South and not for a Western audience. In particular, the collective has taken on the long-form road trip as the building block, focused on breaking down boundaries between African nations.

Lagos, Nigeria has been the nerve center of the project since 2009, but from there the road trips radiate outward across the continent as part of a trans-African exchange, on the margins of contemporary art. Starting as a project where artists took photographs as they crossed into each country, the project expanded to take in literature, film, and performance art. Individual projects, such as the Lagos Maputo 2018 road trip, stretched into 50 days and equal numbers of entries, from exuberant music videos to a sober assessment of Rwanda’s post-genocide futurity. While real-time sharing and video diaries are a visible aspect of how the project makes itself known during and after a journey, this has never been a project consumed with the over-production of material and archives. Look closely at the mission statement and the emphasis is clear: “collective journey of the participating artists who, during their momentary stops in capital cities”, and so on. The long travels are the point, not the arrival at a destination.

This is not a project focused on grand outcomes, or tangible milestones, as favored by certain NGO-modeled arts funding today. A great volume of work is produced by Invisible Borders, but communications underscore the transformations and friendships among the artists on the long-distance bus. It is there especially in the way they focus on what artists do after finishing the journey, when they return to their own countries and cities. The focus on borders as lines to break and overcome gives Invisible Borders a possibility to create something new outside the nation-state form, and it is best expressed in the psyche and artworks made by the alumni of this project many months after the road trip has ended, when they are back in their own homes. Except the idea of a “home” in Africa has permanently changed, because of what the artists learnt from each other, in ways that are both symbiotic and friction-laden. The Congolese artist finds herself unable to stereotype Nigeria’s oil-riches, and the Cameroonian photographer is haunted by the beautiful energy of a Kigali that defies Hollywood’s Hotel Rwanda. Invisible Borders meticulously documents all works produced, with different do-it-yourself (DIY), scrappy website hosting platforms (blogspot being the earliest) that also stand as testament to a decade of technology shifts for moving image and text. One can follow projects from 2009 and trace a repeated, looping, and accumulative line of movement across Africa. Yet I still think that Invisible Borders is most important for the spirit of the journey, and what happens to the travelers afterward.

I started with a memory from my own Bangladesh, and this was not a random itinerary for the Invisible Borders Trans-African concept– rather, it universalized their idea of Africa. In 1972 Walter Rodney published How Europe Underdeveloped Africa. Fifty years later, Invisible Borders audaciously proposes the contrapuntal arc: How Africa might show a path for building warm neighbors, not hostile walls. After traversing the African continent, the project expanded to post-war Sarajevo for a road trip between Africa and Europe’s former Socialist Bloc periphery. It is in this spirit that the team traveled in 2020 from various African countries to a central airport, and from there to Bangladesh, and then finally with a group of Bangladeshi artists to one of Asia’s most heavily militarized map lines– the Bangladesh-India border that has become the site of frequent killings by Indian soldiers of poor Bangladeshi migrants. As anthropologist Delwar Hussain outlined in Boundaries Undermined (2013), this border is the site of lethal military surveillance, and also a bustling microscopic scale city on a border line, where sexuality, commerce, bureaucracy, and leisure meet, collide, and overlap. It is this perpetual push-pull between danger and promise, that is captured in the joint project produced as a newspaper and exhibition this spring. 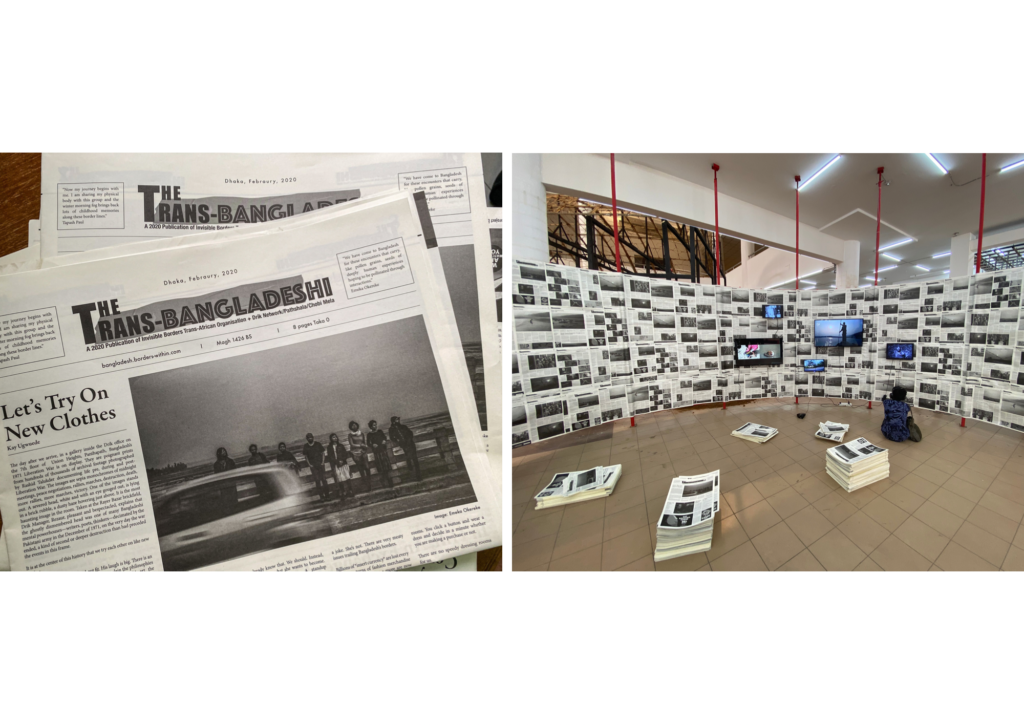 The spirit of more roads / less walls is captured decisively in the haunting images and prose that Invisible Borders has left for Bangladeshi artists to savor and build on in the coming years. The Islamic preacher who tries to pronounce Nigeria as “Nai-je-ria”, the young villagers who ask with simple naivete about dreadlocks, and finally to Innocent, a member of the road trip, patiently obliging requests for selfies from villagers who are meeting African artists for the first time.

Finally, I treasure a quiet image of three young Indians at the Hili border checkpoint between India and Bangladesh, eagerly snapping mobile phone images of the artists. Their easy smiles and enthusiasm stands in sharp rebuke to the heavily armed border guards of their own nation.

This text was written as a nomination statement for the Jane Lombard Prize for Art and Social Justice. Invisible Borders were a finalist for the 2020 edition of the award, which went to Conflictorium (Avni Sethi) in India.